COLOMBO, Jan. 4 (Xinhua) -- Port City Colombo, in association with local partners, launched a year-long project to clean up a 5 km stretch of beach it the city of Colombo on Saturday.

The project was inaugurated at the Mount Lavinia public beach with the presence of Secretary to the Ministry of Urban Development, Water Supply and Housing Facilities, Priyath Bandu Wickrama, State Minister of Environment Jayantha Samaraweera and Port City Colombo Managing Director, Jiang Houliang.

Making a speech at the inauguration event, Jiang said that Port City Colombo promoted sustainable urban living. He noted that despite being blessed with pristine beaches, accumulation of waste and debris harms visitors as well as local residents and businesses. 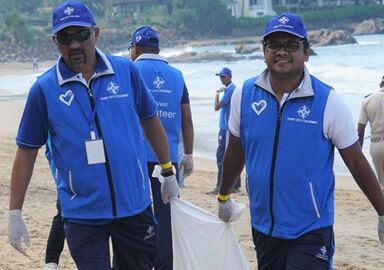 "We have undertaken this initiative as part of our corporate social responsibility to ensure a cleaner beach that will benefit people and support local tourism to sustain in a pleasant environment," Jiang said.

The year-long project is to provide daily clean-up of a five kilometre stretch of beach in Colombo, namely Wellawatte, Dehiwala and Mount Lavinia which is popular among local families and foreign tourists.

The project is funded by Port City Colombo and supervision of daily maintenance of the beaches will be overseen by the local Wana Arana Foundation.

Samaraweera emphasised that keeping Sri Lanka clean and safe was a policy priority of the government and he expressed his gratitude to Port City Colombo for helping meet this goal by funding the project.

"Keeping Sri Lanka clean is not a one day event but an ongoing project that will require the cooperation of citizens and government authorities," Samaraweera said

The inauguration was attended by dozens of volunteers including local and Chinese Port City employees, school children and families. Some foreign tourists were also seen joining in the project for the first daily clean-up of the year.

Eighteen year-old Sajani Perera, a volunteer, said she had heard about the project through her school and was keen to participate with her friends and family.

"I thought it would be a good deed to participate in an event like this and give back to my country," she said.

Zhang Qian, a new Chinese employee at Port City Colombo said that she had participated in similar activities in China and was happy to do the same in Sri Lanka. Noting the kindness of Sri Lankan people, she said that she was keen to see the country develop.

"There is an old Chinese saying that strength comes from many hands. I'm grateful that our company is bringing people together through this project and I hope there will be more activities like this in the future," said Zhang.

Local fisherman Sriyantha De Silva, who has lived in Mount Lavinia for 30 years said that the beaches in Colombo had become very dirty due to lack of facilities. He noted that the situation had begun to change with the introduction of recycling bins by Port City Colombo in partnership with the government.

"I hope these kinds of programs continue in the future so that we can keep our beaches beautiful and clean," De Silva said.

Invested by China Harbor Engineering Company, Port City Colombo is a project to build a modern sustainable smart city out of 269 hectares of land reclaimed from the sea and added to the district of Colombo. The city is envisioned to be a hub in South Asia.

The land reclamation phase of the project has been completed with the construction of roads, bridges and waterways currently taking place.